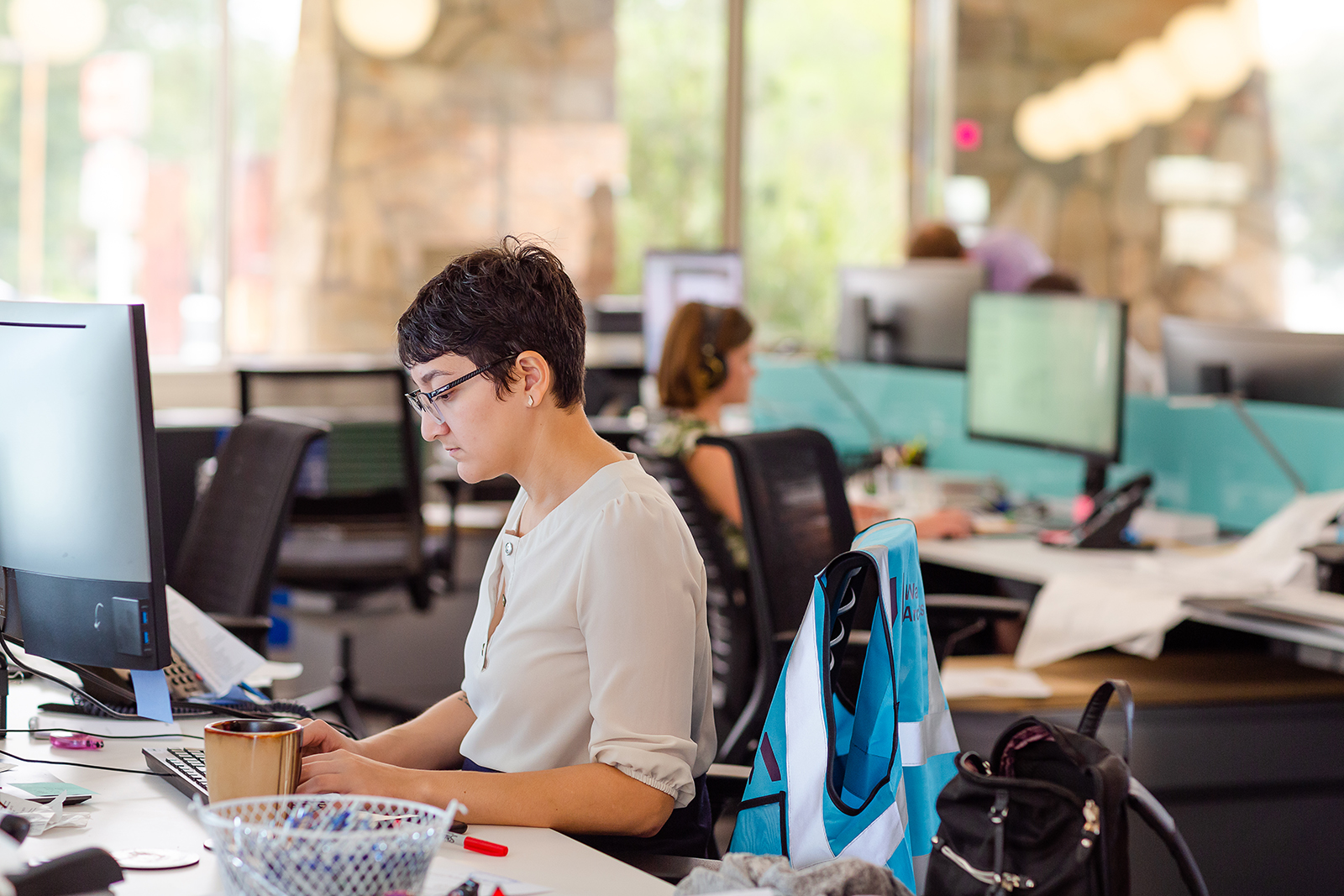 The Agile Workplace needs no introduction: it’s a phrase and idea heard regularly in our studio for quite some time. We’ve worked with it on projects from concept to completion, seeing the ideas implemented in real space. We’ve had conversations with clients about it, we’ve let it influence our designs, and we even used this idea as a guide in designing our own office.  So, rather than focusing on the definition, we want to start by unpacking the "why" behind the Agile Workplace. Why are we working with these principles, anyway?

In our second blog post, we'll take a look at existing precedents which embody this idea, and how they do so. There are plenty of sites to examine that include these concepts, from natural settings to the built environment, from old to new architecture.

In part three, we'll get to the good stuff: how do we apply these principles to the work we're doing? We'll look at the challenges, benefits, and strategies for how these ideas are incorporated into the workplaces we design. 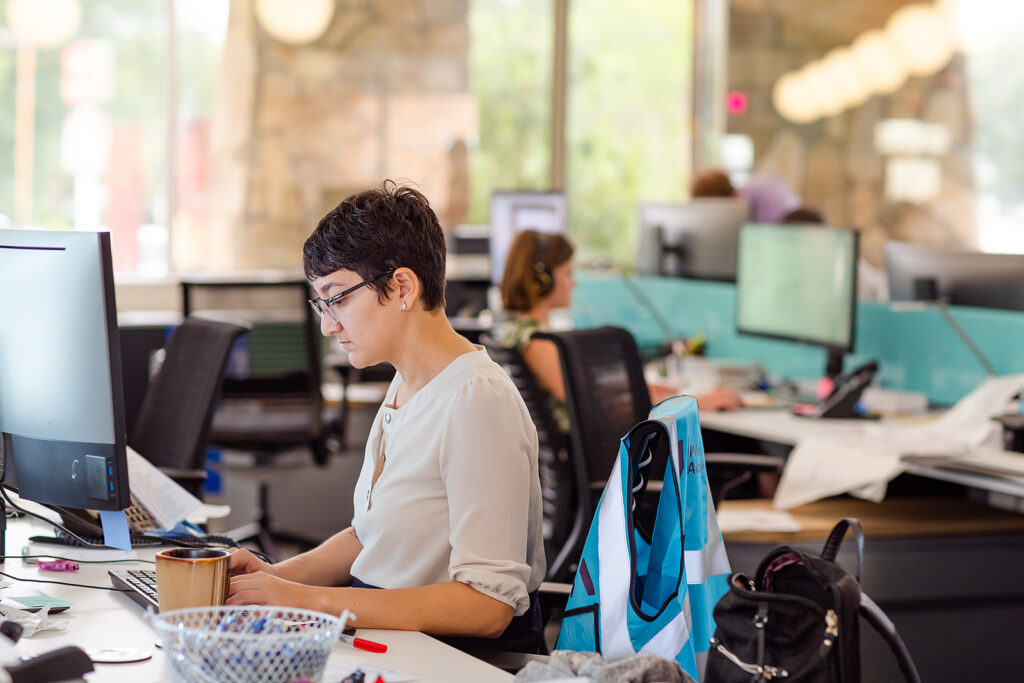 1.A: The Human Reason

Let's start with a thought experiment. It’s twelve-thousand years ago. You, a Neolithic human, go to “work." Perhaps your career involves making stone tools, hauling huge rocks (looking at you, Stonehenge), or maybe sowing a field on the cusp of humanity's mastery of agriculture. What boundaries existed between the world at large and your workplace? No walls, artificial lighting, cubicles, or office space — the only boundaries and systems defining the workday were the beginning and end of the day, the clockwork of the seasons, and the interaction with other skilled and knowledgeable members of the community.

Since then, the places we work in and the world we evolved in grew increasingly dissimilar. Humanity’s determination to increase yields has driven the workplace towards an ever more controlled and organized definition — but walls, doors, and a highly-controlled environment are a relatively recent revolution in the environment which defines our daily work life.

The standard workplace of the most recent generations wasn’t one that responded to basic human needs. The radical rejection of cubicles, walls, and doors — the open workplace — seemed to be the answer to this mind-numbing monotony, but it too came with some problems. If the only defining principle of the workplace is “openness,” then it only responds to one type of need. 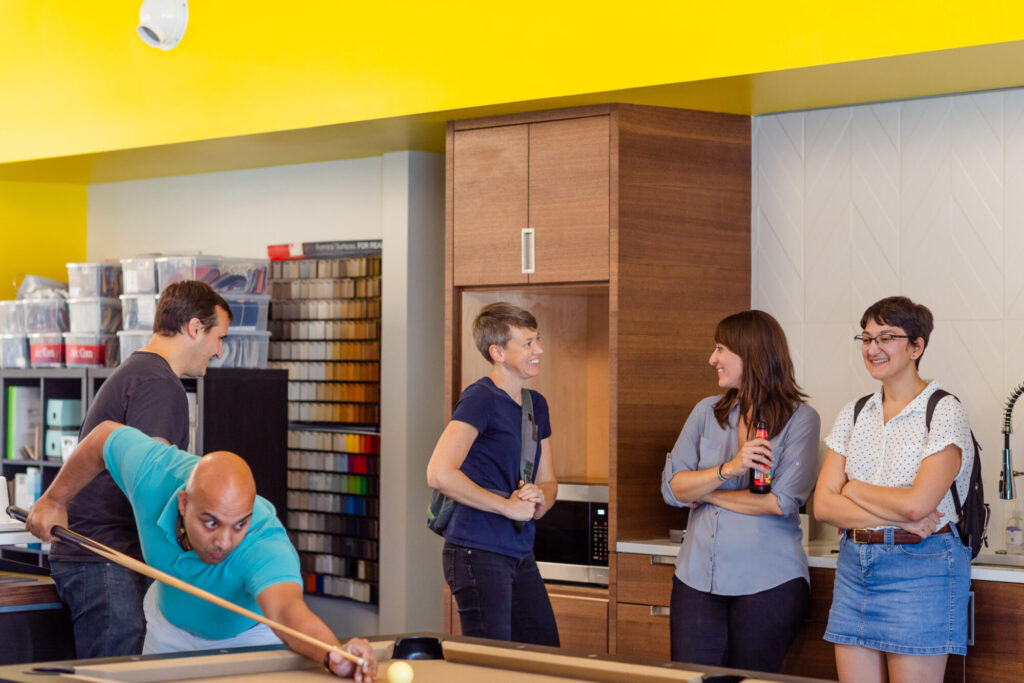 The Agile Workplace reintroduces the similarities between our natural habitat and the work-space. The single most important aspect of this shift is the addition of choice. This means the inclusion of less orderly spaces, the embracing of overlapping territories, and the incorporation of variety. The Agile Workplace acknowledges that some degree of ownership is necessary; however, it presents ownership in different ways than the traditional walls-and-doors office. While ownership in one form or another still exists in certain areas, in general, there are more shared spaces, and a greater variety of common spaces to choose from. This isn’t just the removal of walls and doors — this is the addition of a multitude of spaces that address a wide spectrum of needs, improving the workplace’s ability to foster productivity, and “humanizing” the place where we work.
This is an instinctual transformation, one that engages with what makes us human. And there’s evidence that backs up why agility is not only important for the person’s well-being, but also for a company’s bottom line. 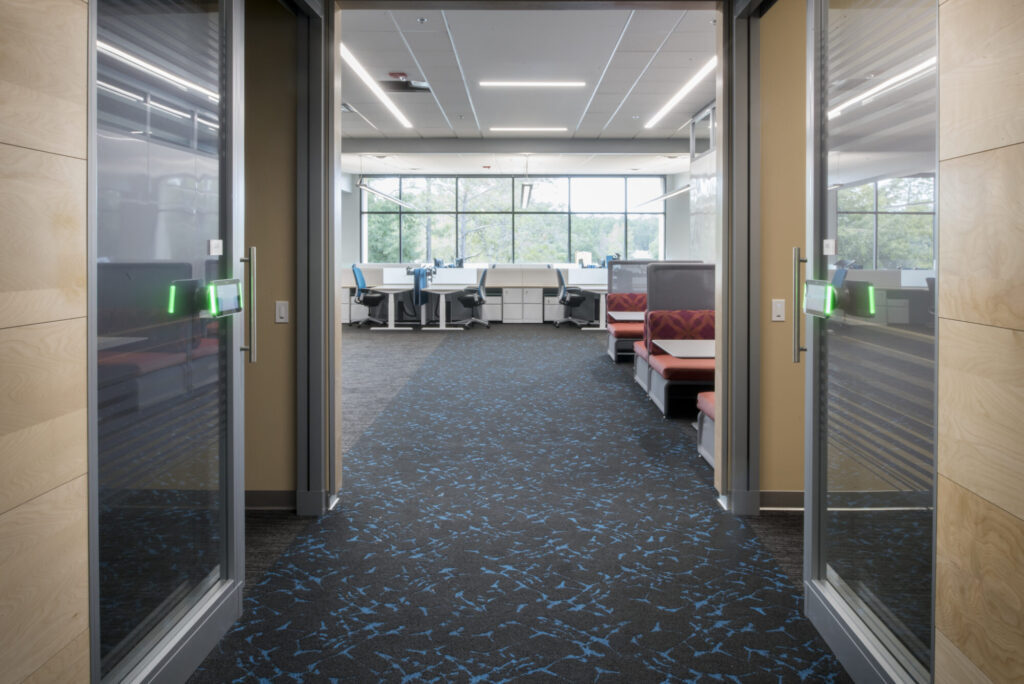 Steelcase is an important contributor to the body of evidence in support of the Agile Workplace, as well as the development of the systems which make it work. In one of many experiments in interior environment within their own facility, a department’s space organization was transformed to a layout which implemented urban planning strategies – parks, neighborhoods, districts – and through this, they found that the transition led to benefits in the well-being and performance of their employees. Employees demonstrated increased productivity, increased trust, and reported that they had better access to leaders, teams, supplies, and an increased feeling of purpose.

On the surface, space types used in this experiment were inspired by those we encounter often in an urban setting; but on a more fundamental level, the design honed in on space types which are fundamental to human nature. These natural space types, outlined by Terrapin in their research on patterns of biophilia, are prospect, refuge, mystery, and risk. “Prospect” is defined by the provision of an “unimpeded view” over a long distance – the act of surveying. Let’s go back to our Neolithic thought experiment: imagine yourself on top of a cliff, purveying all the land before you. It’s nice right? Analyzing everything your eyes can see brings a sense of comfort and confidence. In contrast, “refuge” is a space which is protective and withdrawn, where a person is protected from above and behind. (Why do you think we dwelled in caves?) “Mystery” is less direct — it’s the provision of only partial information, an obscuring which invites an occupant to experience something further. Finally, “risk/peril” ties in to the exhilaration generated by the close proximity of a dangerous element which is inherently intriguing. 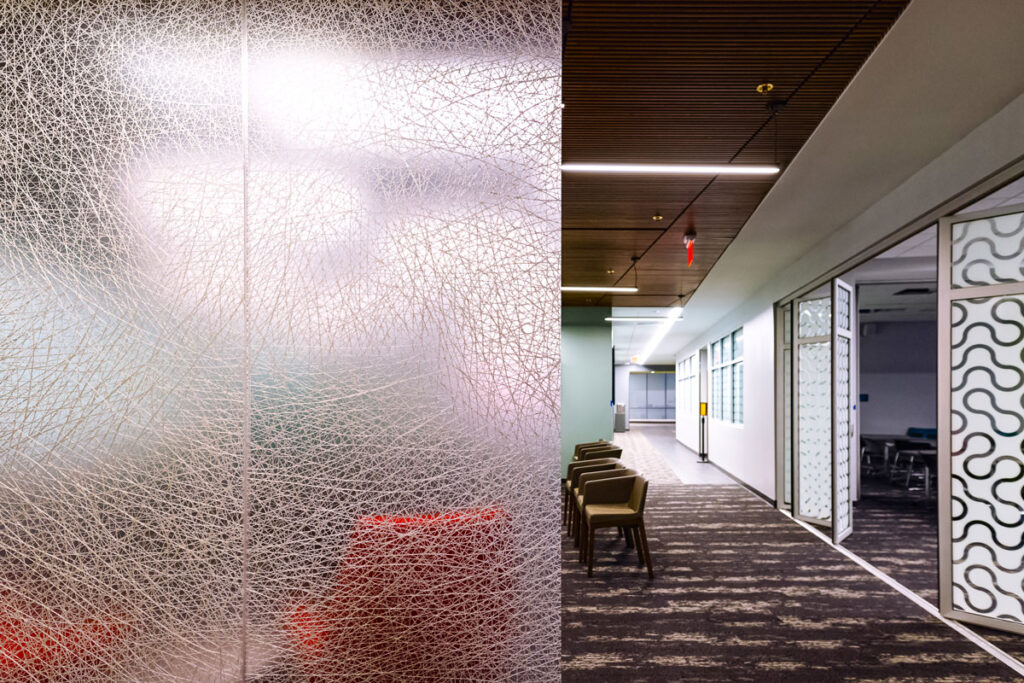 Bringing these spaces to a team not only makes them feel better, but perform better. A holistic design reduces stress and anxiety, enhances acuity, focus, and mood, and positively affects cognitive performance and functionality in the workplace. There are endless ways to think about how these space-types can begin to inform a design: areas with visibility across an entire team; places to retreat for unimpeded productivity; design elements that invite the occupant to travel further; spaces that feel like they are on the edge of another zone. The inclusion of all space types in their many manifestations creates a workplace that is diverse, dynamic, and natural. Thinking in these terms when designing teaming areas, breakout spaces, studios, break areas, and other work areas can frame things in an instinctual, human way. 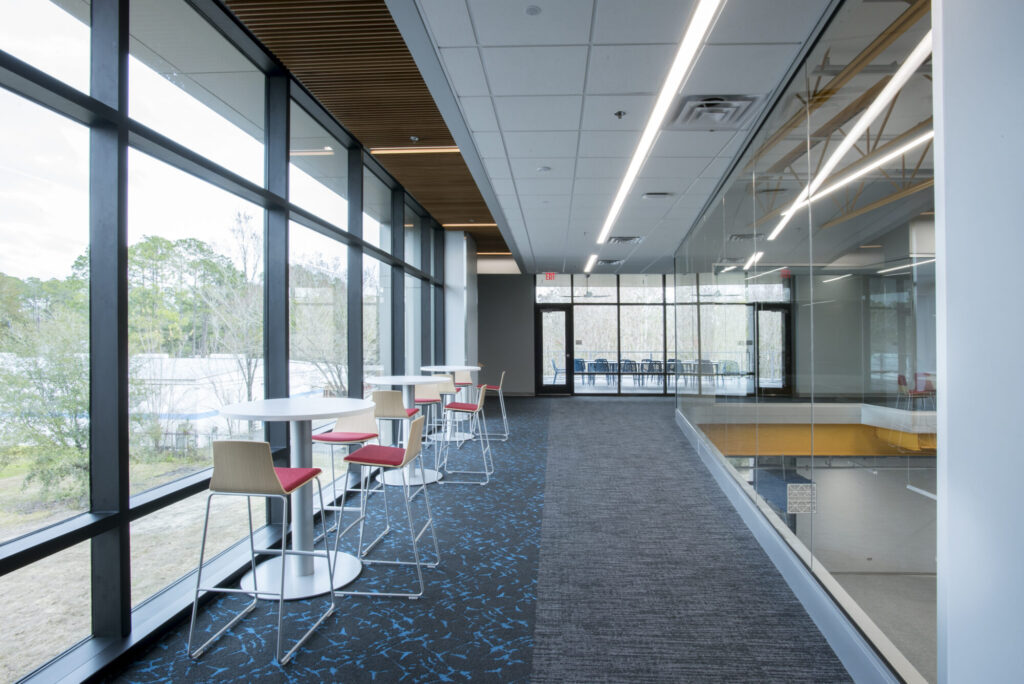 While presenting a variety of space-types in tune with human nature is one contributor for enhanced workplace performance and mood, more than just typological variety is needed to round out a balanced Agile Workplace. Psychologists have suggested that, alongside providing ownership over distinct territories and the ability to change their setting, humans need to be able to change the quality of their environment, such as varying temperature, air and light; they need the presence of meaningful stimuli; and they need a view to the outside world. 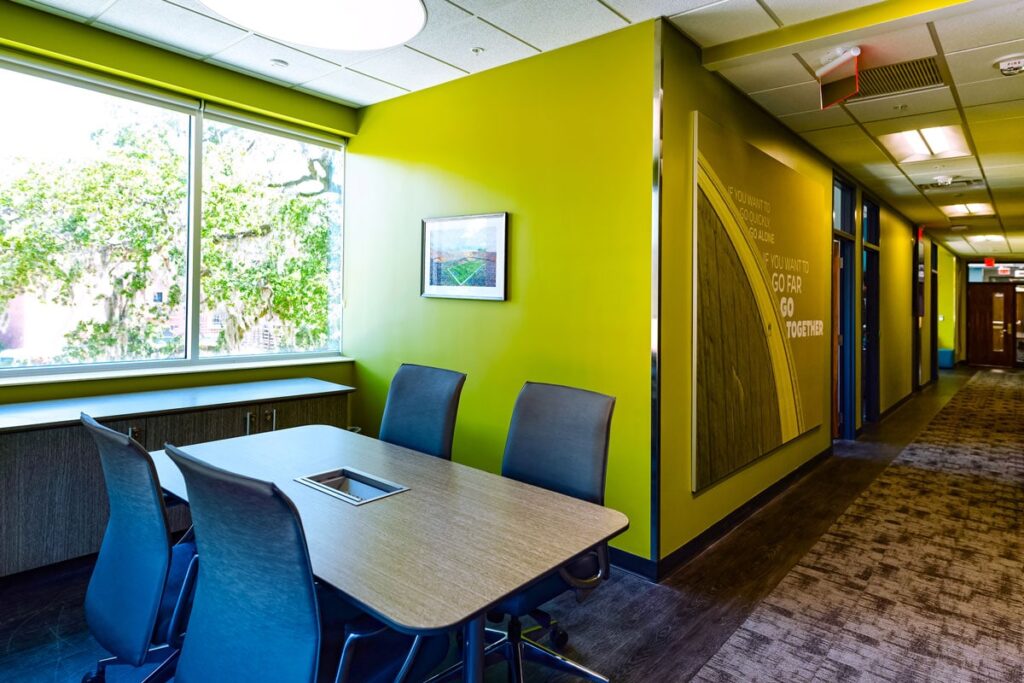 Albeit the natural thing to do, it may seem like bringing people out of their offices and into a variety of shared, private, open, and sheltered spaces, with some degree of environmental control, natural light, and natural views — is also expensive. While there is certainly an up-front cost in making any kind of change to the workplace, the payoff in this case quickly surmounts the cost of making the change. This payoff is in the increased productivity, worker satisfaction, and reduction in absenteeism that have been seen upon implementation of these strategies. In one experiment within an office building with a third of its offices overlooking a parking lot and street, a third overlooking an area with trees and landscape, and a third with interior views only, the employees with a natural view took ten hours less sick leave per year. The variation in sick leave taken was also found to correlate with architectural aspects of environmental quality, including the amount of window area and lighting quality. The analysis also found that those who had better views took shorter breaks than those who had interior views, who tended to wander throughout the building to find a more pleasing place to break.

Even when staff does show up for work, there is economic sense in ensuring they are productive, too. One study showed that when presented with a view outside, versus a view of a curtained wall, participants experiencing low-level stress demonstrated enhanced physiological recovery from this stress. In an experiment in a call center, employees with views to exterior vegetation from their workstations made 6%-7% more calls than those without exterior views. The cost of adding windows and adjusting workstations to ensure all staff had views outside amounted to $1,000 per employee, while the savings in productivity more than doubled that number; the initial investment was returned in only four months. It’s clear that the incorporation of natural elements, whether its prospect to an exterior view, or the variation of daylight at a workstation, has tangible benefits on employee performance. 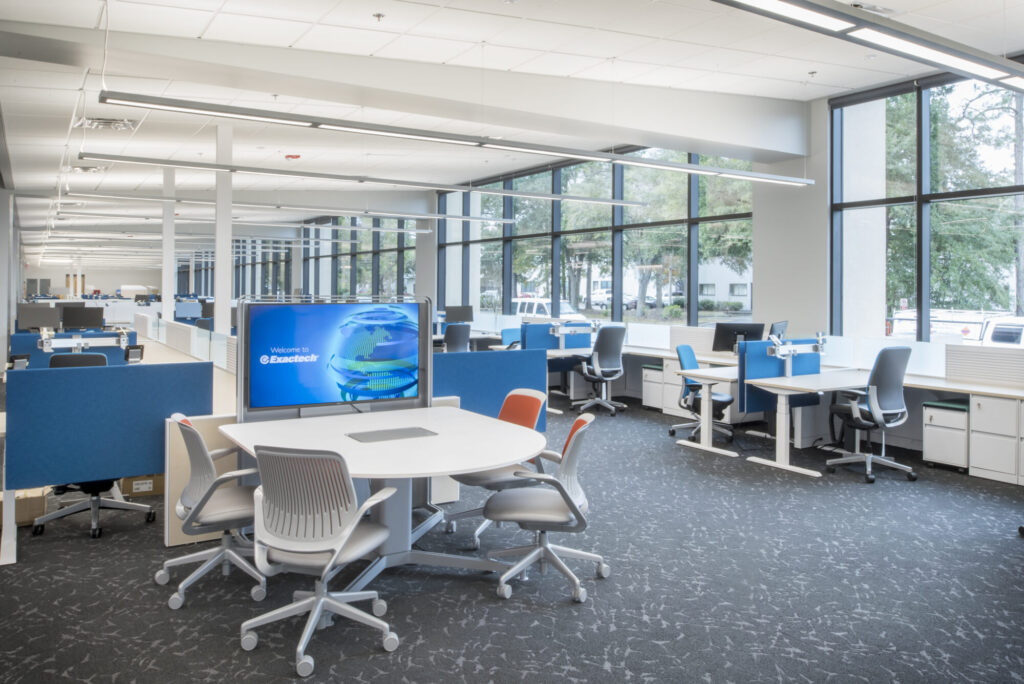 Our own office experienced a revolutionary change last year, when we moved from a dark interior office with limited views, a lack of natural light, and poor ventilation to a dynamic, atmospheric space of our own. More than just bright and airy, the space is a laboratory for our development of the Agile Workplace as it appears in our designs for clients. The open work area is balanced with small rooms for quieter work or focused meetings. A large meeting space flows from a break area, which offers room for working away from our desks, standing meetings, or simply a moment of respite.

The effects of this new environment on our team were noticeable immediately. Enhanced mood, focus, and collaboration was there from day one. It hasn’t quite been a year since the move to our own Agile Workplace, but it seems there are less sick days and sniffles, more time working together in an environment which feels meaningful and energizing. It’s confirmed our notion that in an effort to work with agility, it’s necessary for the workplace to be agile, as well. 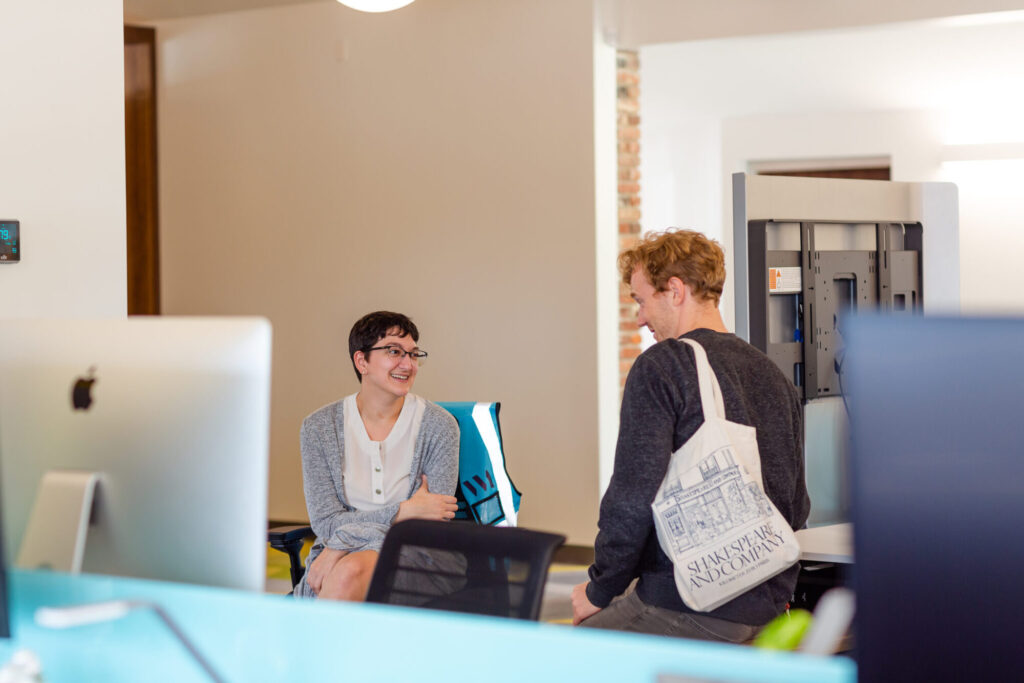 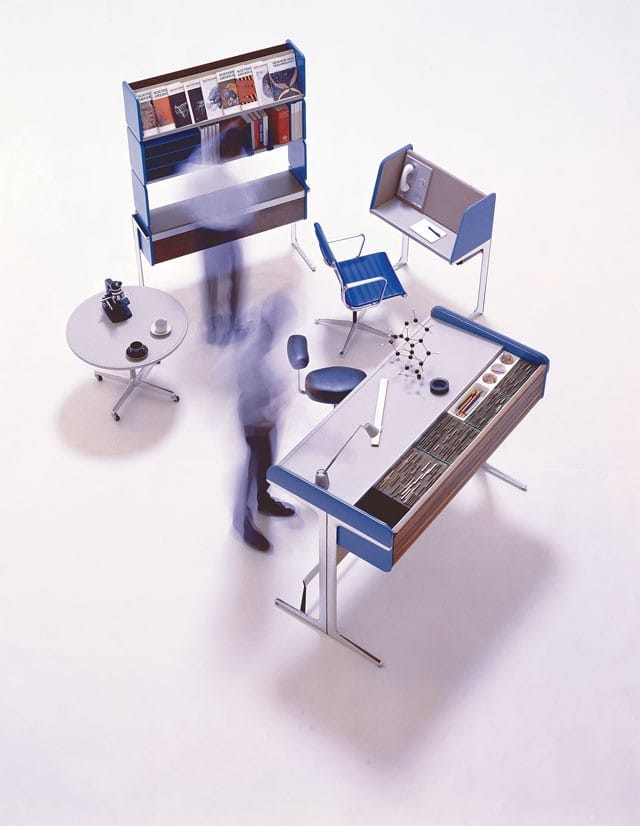 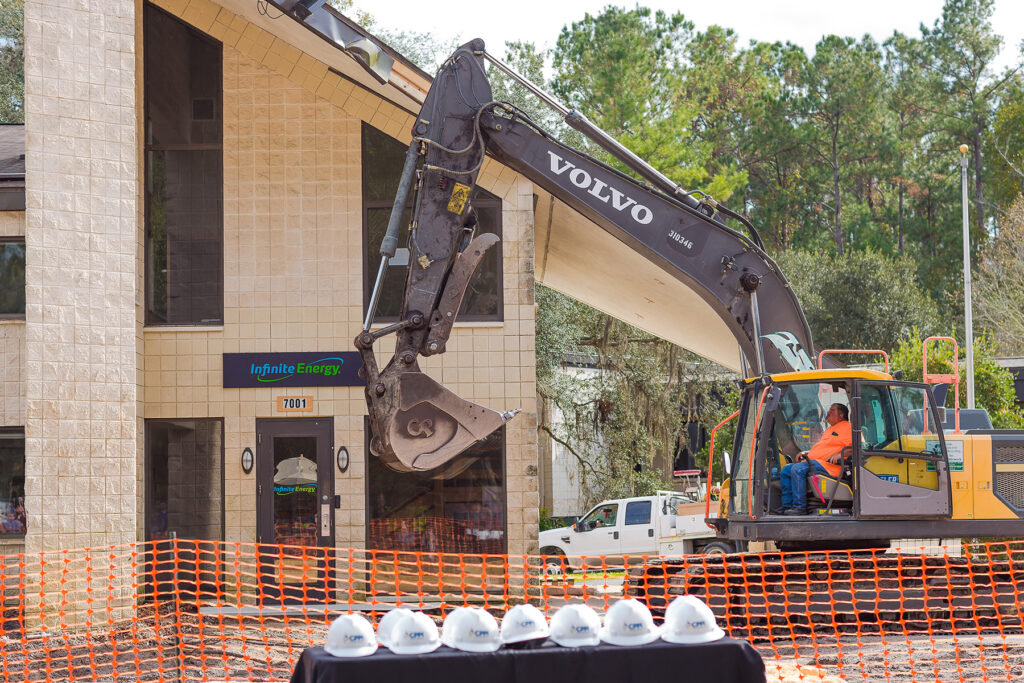 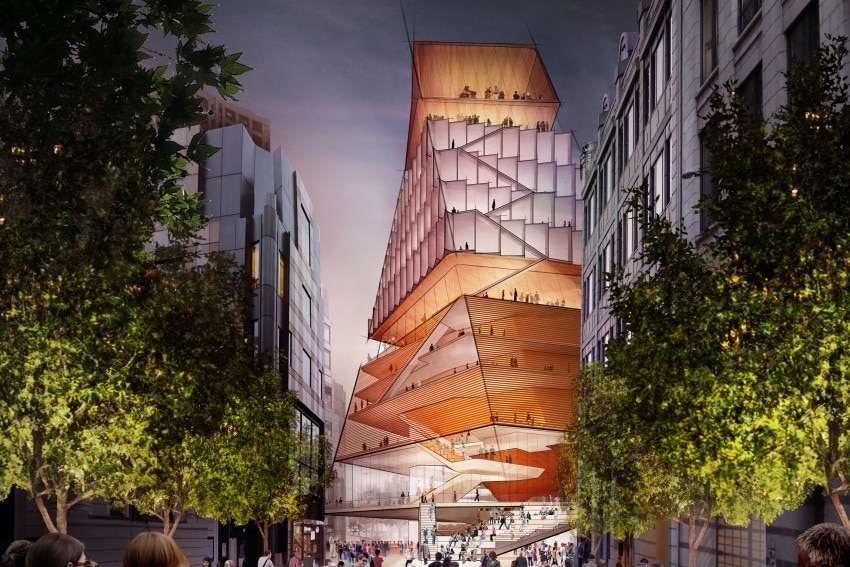